The number of patients with Covid-19 in public hospitals has fallen below 600 for the first time since January 1st.

While, according to latest HSE figures 10 people in ICU died after contracting the virus – the largest number in a 24-hour period since the start of the pandemic.

It comes as 56 additional deaths and 574 new cases were reported yesterday, eight in Carlow and five in Kilkenny. 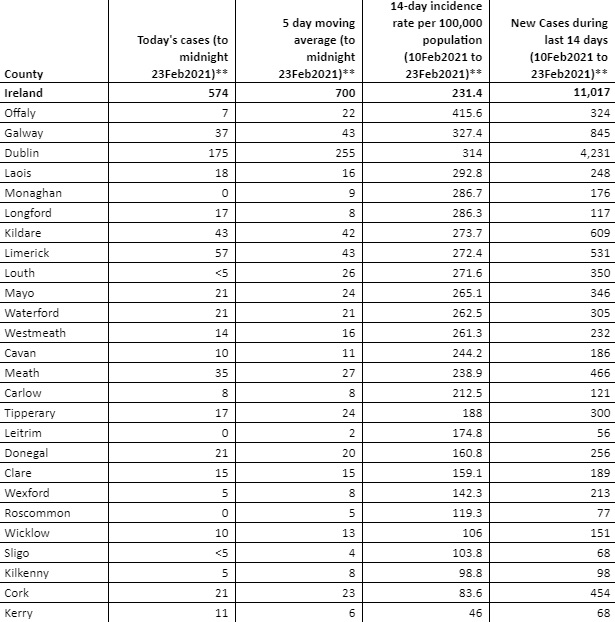 Meanwhile, our Sue Nunn’s been catching up with Professor Gerry Killeen – hear what he had to say on KCLR’s The Way It Is last evening here:

The number of Covid patients in hospital and intensive care could be halved in less than a month, if the current trend continues.

It says the health service remains ‘extremely fragile’ and the Covid crisis has had an ‘enormous impact’ on healthcare staff.

NPHET says it’s too early to advise when further restrictions can be eased, due to ‘current uncertainties’.

Last night ten people were being treated for Coronavirus at St Luke’s General for Carlow and Kilkenny after one new admission, three are in intensive care with one other suspected of having the virus. While 30 patients at University Hospital Waterford have Covid, two in ICU and two more are showing symptoms.

Meanwhile, the number of patients going to GPs with symptoms of Covid-19 has stopped dropping over the past two weeks.

Dr Shane McKeogh is from GP Buddy, which tracks calls to surgeries around the country – he says there’s been a worrying trend.

Further exchanges are expected in the Dáil later on the government’s bill to introduce mandatory quarantine in hotels.

The legislation was heavily criticised by opposition parties yesterday, who argued it doesn’t go far enough.

If introduced, it’ll see arrivals from 20 ‘high risk’ countries made to quarantine in a hotel for 2 weeks at their own expense.

It comes as the Health Minister confirmed up to 3,500 people are still arriving into Ireland every day from overseas.

Professor Julien Mercille from the Independent Scientific Advocacy Group, says all passengers should be made quarantine.

It’s believed visitor restrictions in English hospitals could have contributed to the death of new mothers there.

An investigation suggests Covid-19 rules, which banned partners being with pregnant women may have led to delays in people seeking vital care.

It could have also led to more self-discharges.

The findings are based on the deaths of 19 women in England between March and May last year.