Level 5 restrictions will be extended until April 5th this afternoon with home building remaining shut for another month.

While more than 300,000 students will return to the classroom next Monday.

Last night the cabinet sub-committee on COVID agreed to extend Level 5 restrictions until at least April 5th when there will be a review.

The only changes will be the re-opening of schools and childcare.

5th years and the remainder of primary students will be back on March 15th.

The rest of secondary school students won’t be back until after Easter, on the 12th of April.

Childcare will return on a staggered basis with those on the ECCE scheme being back from March 8th and all others on March 29th.

There will be no re-opening for construction next month, which some Ministers believe will lead to a housing hangover later this year.

A revised living with COVID document released later will be “nothing like” the UK’s according to a cabinet source.

It won’t provide dates beyond April for when parts of the economy can re-open, with fears in some parts of government that it lacks a bit of hope.

There will also be an update given on the timeline for vaccinations and a review of the priority access list which is likely to lead to people with certain underlying conditions being moved up the list.

While the Construction Industry Federation says building firms could go to the wall due to the extended closure of the sector.

80,000 staff have been out of work since the majority of sites were closed on January 8th, and they’re set to remain shut beyond March 5th.

CIF director-general Tom Parlon says it will have a huge impact.

The number of people in public hospitals with Covid-19 has dropped below 700 for the first time since the start of January.

676 people were receiving treatment for the virus, while there’s 156 in ICUs.

Four of these are in the unit at St Luke’s General for Carlow and Kilkenny, among 14 there with the virus after one new admission, though two others are suspected of having it also.

Four more are in critical care at University Hospital Waterford, among 39 patients with Coronavirus with three more showing symptoms.

It comes as one death’s been reported and a further 686 new cases, 10 in Kilkenny with eight in Carlow.

The national 14-day incidence rate of the disease is 240, the lowest it’s been since December 27th. 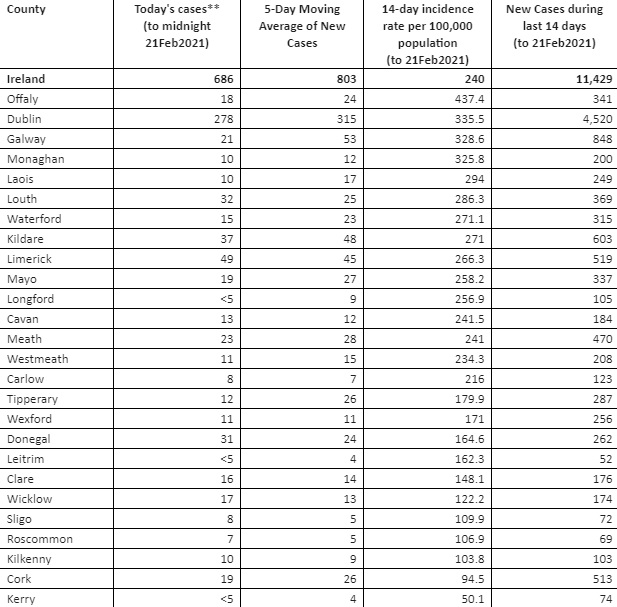 Just over 126,000 people have received a second dose of a Covid-19 vaccine according to latest figures.

In total there has been 340,000 injections administered since the end of December.

89% of the vaccines given so far have been Pfizer-Bio-N-Tech and 9 percent are AstraZeneca.

The UK Prime Minister is hopeful lockdown in England can be lifted on June 21st.

Large concerts and nightclubs could be allowed to operate by the end of June.

While plans to lift Scotland out of lockdown will be announced this afternoon.

Nicola Sturgeon says the route will be “broadly similar” to England’s.

The first minister says they will return to a localised “levels” system which was in place in autumn last year.

And she hopes this will be the last Covid-19 lockdown.

The US has passed what Joe Biden’s called a ‘truly grim, heartbreaking milestone.’

The country’s registered half a million Covid-19 deaths – more than the combined death toll from World War One and Two, along with the Vietnam War.

At the White House, the US President held a moment of silence.

Before that he addressed the nation, with a message of hope.