They say he’s been eliminated from their enquiries and is no longer a suspect in the death of the 23-year-old teacher who was killed while jogging along the Grand Canal in Tullamore, Co Offaly on Wednesday afternoon.

A renewed appeal for information’s been made, in particular for details or sightings of a Falcon Storm mountain bike with straight handlebars and distinctive yellow/green front forks.

Investigators are also keen to hear from anybody who may have witnessed suspicious behaviour in the area at the time to come forward if they’ve not already done so.

Sinead Hubble is head of news at Midlands103, the local radio station in Tullamore, and she’s told KCLR the incident is particularly terrifying because it seems it could have happened to anyone:

The INTO President says yesterday was an emotional day at Durrow National School where Ashling was a teacher.

Kilkenny principal Joe McKeown was there to take part in a ceremony with the students and staff and says it was handled very well.

But as he told KCLR afterwards it’s a sad fact that every school has to have a plan in place for when something like this happens.

Many of the children in Ashling’s class would only have been told about her death as they got ready for school yesterday morning.

Carlow College lecturer and well known human rights activist Stephanie McDermott is originally from Durrow in Tullamore and grew up across the road from the school.

She now lives in Kells, Co Kilkenny and was among a group of locals lighting candles for Ashling on the bridge in Kells County Kilkenny yesterday evening and from there spoke to our Sue Nunn:

Another member of that community who was in attendance was Siobhan McQuillan who told KCLR News “it’s very important to come together to stand in solidarity, it’s been an emotional day and it’s affected a lot of people”.

She added “I’m a mother, I’ve got three girls, you just want them to have a safe future, want them to be safe”

She’s also project lead for Amber’s One Million Stars Ireland, eight-pointed stars which represent light, hope and solidarity against violence and today’s Kilkenny City vigil takes place from 4pm at their display in the Castle Yard. 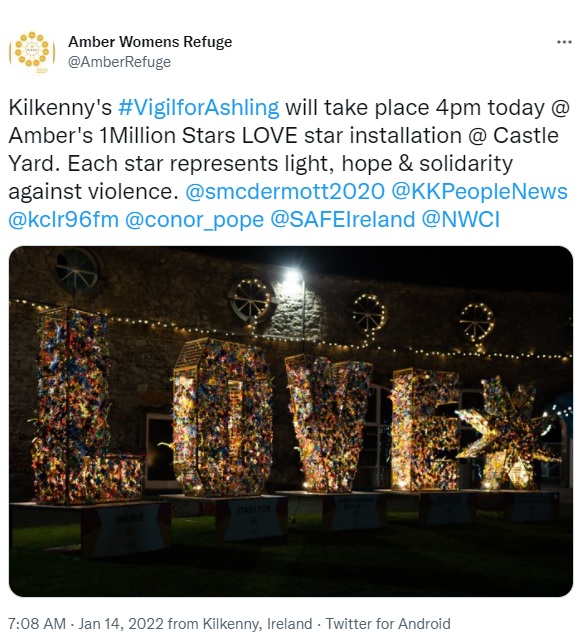 While Kilkenny ParkRun is planning for a show of solidarity this weekend: 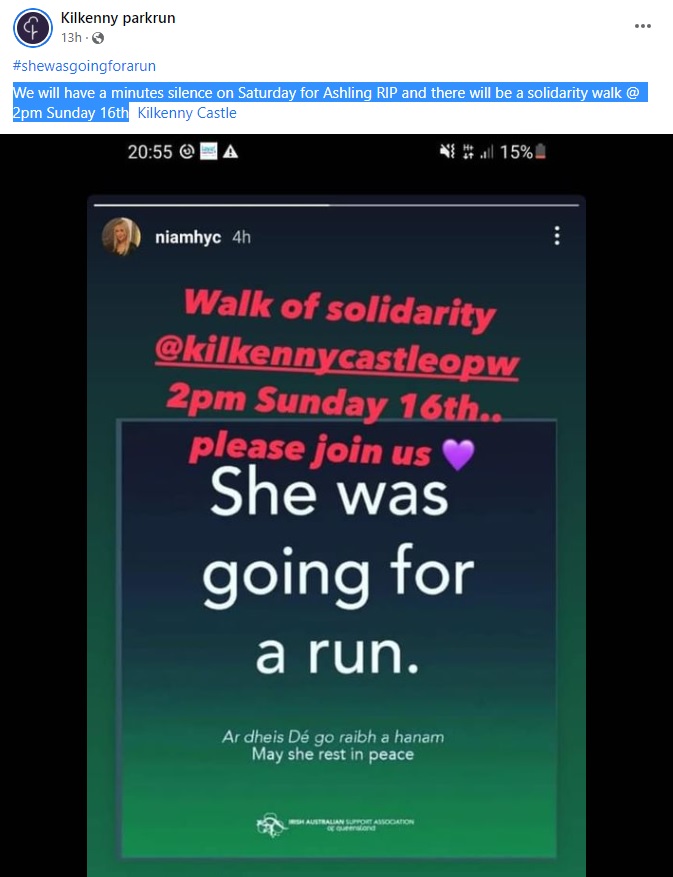 Other cities, towns and villages are holding vigils, including in Tullamore itself and outside the Dail in Dublin at 4pm this afternoon.

While Carlow Women’s Refuge Campaign has organised a candle-lit gathering in solidarity with the Murphy family at 6pm this evening at the fountain in Carlow Town and there’s another at the Fair Green in Bagenalstown at the same time.

IT Carlow students and staff will be gathering there for a minute silence at 11am.