The one-millionth dose of Covid-19 vaccine is due to be administered in Ireland today.

The Government had previously aimed to get 1.25 million doses given to people by the end of March, however there were supply issues.

Meanwhile, nine further Covid-19 related deaths have been recorded by the Department of Health and 443 new cases of the disease were reported.

For the first time in a long time there were none in either Carlow or Kilkenny with both counties now in the country’s lower four counties regarding the 14-day incidence rate (42.2 and 32.2 respectively).

The five-day moving average number of cases nationwide now stands at 463, which is almost 15% lower than last week. The figure is one in each of our local counties.

While just one person with the virus continues to be treated at St Luke’s General Hospital for Carlow and Kilkenny.

Jack Lambert is a professor of infectious diseases and he believes the Government will struggle to meet its vaccine target of four million doses by the end of June. 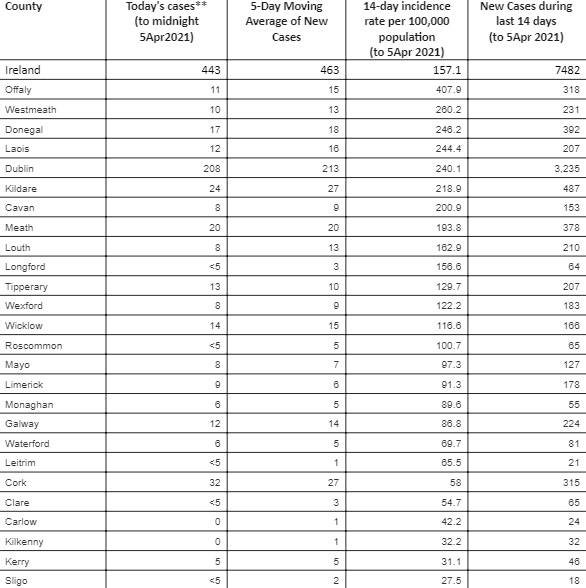 A key World Health Organisation safety committee will meet today to discuss the safety of the AstraZeneca vaccine against Covid-19.

But officials have been clear they don’t yet have cause to change their advice.

The European Medicines Agency safety group will also meet to discuss concerns over blood clot events, after one of its officials said a link to the vaccine was now harder to rule out.

Human rights activists say the government should scrap any plans it has to issue Covid-19 vaccine certificates.

It’s after Tánaiste Leo Varadkar said it could be the way to let hospitality businesses and live arts events return sooner.

But he says demanding proof in the domestic economy will only lead to discrimination — and erode trust in the vaccine programme.

A third Covid-19 vaccine is being rolled out in the UK, alongside the AstraZeneca and the Pfizer.

People in Wales will receive the first doses of the Moderna jab later.

Ireland is expected to get around 350,000 doses of the vaccine over the next three months.