Sunshine and smiles greeted the Housing Minister Darragh O’Brien on his visit to Kilkenny on Thursday.

Residents of the modern development at Glebeside got their keys in recent months.

They were delighted to welcome Minister O’Brien to unveil the plaque yesterday.

The Minister also checked out the brand new development at Pairc Nua on the Castlecomer Road in the city.

18 new homes have been built there on the site of the old Brógmaker guesthouse and pub.

Residents there moved in recently too including Martin Costello who officially received his front door key from Minster O’Brien yesterday. 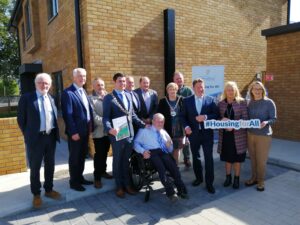 The Minister also declared the new link road for Kilkenny’s Western Environs open and viewed new Respond homes at Margaret’s Field on the outskirts of the city.