The Taoiseach says a decision on exiting Level 5 restrictions will be made next week.

Micheál Martin told a meeting of the Fianna Fáil parliamentary party last night that he wants people to have a ‘wholesome and enjoyable’ Christmas.

A Dáil debate on exiting Level 5 in early December will take place on Tuesday, however the ultimate decision will be taken by cabinet later in the week.

It comes as the death toll associated with Covid-19 here has now passed 2,000, after a further 12 deaths were reported yesterday along with 379 new cases.

Infectious disease specialist at the Royal College of Surgeons, Professor Sam McConkey, says the current trends mean we should be extending the lockdown rather than easing it. 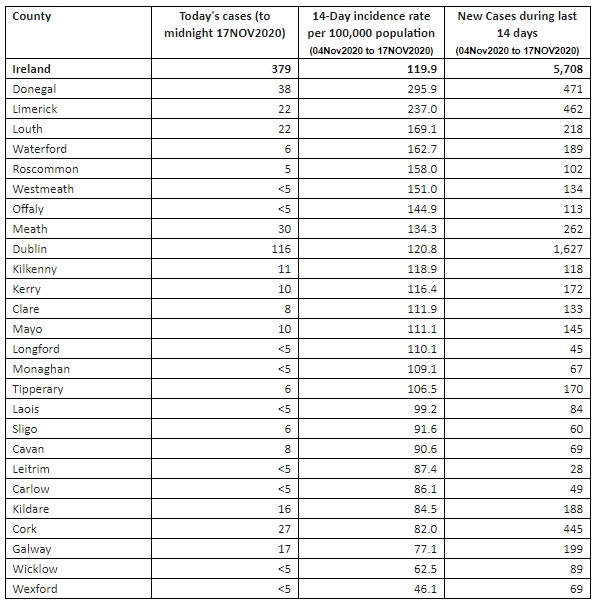 The facilities are to help passengers as part of the EU’s new traffic light system for international travel.

Both were due to start operations today, but only the drive through option will be open.

The walk in centre next to Terminal 2 won’t be up and running until Monday.

The move to open airport testing comes as the travel and tourism sector aims to get back up and running under the EU traffic light system which Ireland has signed up to.

However, the government is still advising against non essential travel as part of our level 5 restrictions.

Meanwhile the outlook for the sector overall remains bleak – yesterday Norwegian Air become the latest airline to apply for examinership while Easy Jet annonced its first annual loss in its 25 year history.

More than 250,000 people who tested positive for Covid-19 are now known to have died in the US.

The number in hospital the virus has doubled in the past month, and set new records every day this week.

America’s reported more than 11 million cases, with the infection rate on the rise in all states.

Some have reacted angrily to the suggestions of a month-long lockdown in January so families can meet over Christmas.

Many fear an endless cycle of tightening and relaxing restrictions.