Over 300,000 children are returning to school today for the first time this year.

Classes will resume for the first four years of primary school and leaving cert students.

The government plans to allow the other years to return on a phased basis over the next six weeks, if Covid is kept under control.

Junior Education Minister, Josepha Madigan, is urging parents not to congregate at school gates this morning.

Local INTO rep Joe McKeon is backing up that message and says today’s the next step in the returning to schools, telling KCLR News “We believe that the opening of special classes and special schools has gone fairly well but we are all a little apprehensive, all teachers are feeling apprehensive about working in a situation where there’s a new variant, I think the important thing is we’re saying to all parents to make sure that they cooperate with the procedures, plan their returns, the forms to say that their child is Covid free, keep their children home if they’re sick and avoid congregating at the school gates and make sure everybody wears masks coming to the school if we all work together we can keep safe and be ready for a full reopening in two weeks time”.

Simon Lewis is Principal of Carlow’s Educate Together and he says the feelings are mixed, noting “There are two overwhelming feelings really; we’ve got happiness of everyone going back to school, we’re all very excited about the children coming into the building, we were open last week for special classes and it was lovely to have the delight in the building but at the same time I suppose we’re a bit terrified if we’re honest, we’re really keeping our fingers crossed that everything goes okay”.

He adds “We’re in a situation where the numbers are still quite high and we just really have to hope that it all goes well, we have all the safety measures that we were given before the holidays and there’s been no new ones since so we just have to hope I mean everybody collectively hopes this goes well and I’m included in that as a principal and as a parent”.

Shane Hallahan is Principal at Presentation Secondary School Kilkenny and he says “I’m very much excited to welcome the students back into the school, I think there has been great certainty given to the girls after the announcement in relation to the Leaving Cert, it was like we have met them a number of times online and it was like a relief, you could see the relief in their faces that at least they had some certainty as to what was happening and they felt it was the fairest way so look we’re very excited to welcome them back, I’m sure amongst the students and the staff that are coming in there’s a nervousness and that’s natural”.

He adds “I suppose it’s up to us to try and ensure that everything is done in a safe manner and to make sure that everybody feels okay about coming in, in so much as possible, because people are leaving different situations at home and things like that so look we’re really, really looking forward to seeing them and you know in school last week as you know every week you’re in the school and it’s empty you just miss the students and you miss the staff around the place, it’s a big cold building, so school is not a building it’s the people who are in it”.

While Carlow mother Angela Doyle says “When my son went back in August, you know the first time, I was actually fine with it, he was very excited, you know, we were very excited for him, he hadn’t seen anybody so it was just a lovely time for him to see his classmates and his teacher, he loves his teacher, he loved seeing his classmates and he loves his school, they’re great, they’re following all safety measures, I couldn’t fault them, this time I’m a little bit nervous, he’s excited once again wanting to see his friends and go back but I’m nervous, I think as a parent it’s always going to be a worry no matter what and then you see the numbers and you worry and the school are very good, the handwashing’s very good and my son is very good to do all of that but I will still worry, I think it’s just being a parent”.

It’s as Ireland is on track to have one of the lowest incidence rates of Covid-19 in Europe.

NPHET say the number of people in hospitals with the disease has fallen by 38 percent, while also saying disinformation must be overcome.

Six more deaths linked to the disease have been reported with 612 new cases, six in Carlow and up to four in Kilkenny.

537 people are being treated in public hospitals, while there are 134 patients in intensive care.

Of these four are at the unit in St Luke’s General for Carlow and Kilkenny, among nine patients with Coronavirus. While University Hospital Waterford has 30 with two in ICU. Neither facility had an admission in the 24 hours up to Saturday night nor had others showing symptoms. 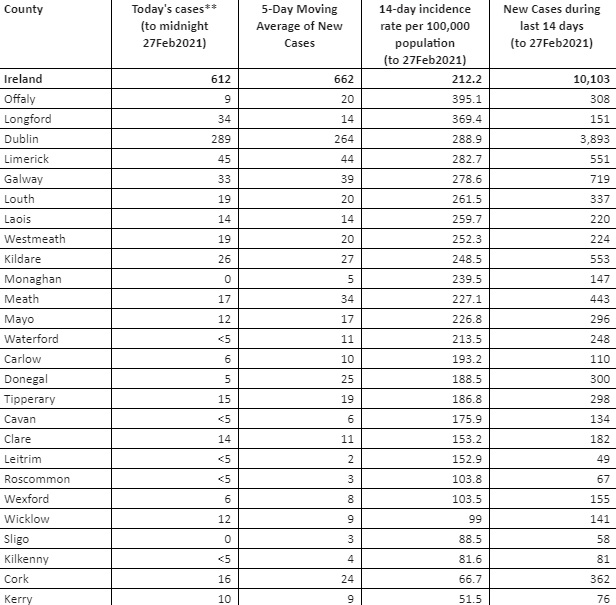 Health experts in the UK there could be more than the six confirmed cases of the Brazilian variant of Covid-19.

Authorities in England are seeking one unknown person who’s tested positive for the strain, who didn’t leave their contact details when being tested.

Public Health England’s Dr Susan Hopkins says they’re tracking down anyone who’s been in contact with people who arrived from Brazil.

A report found that Covid-19 deaths have been chronically under-reported.

Afghanistan carried out just four-hundred tests per day for a population of 40 million in November.