Several local children have been left without a seat on the school bus again this year.

Tickets are being issued at the moment as students prepare to return as early as next week.

But some families in the Gowran, Goresbridge and Paulstown areas have been left trying to figure out how they’re going to get their children there now as they have been turned down for the concessionary tickets they had been issued with in the past.

Caroline who has two sons going to school in Kilkenny is among them – she and Co Kilkenny Councillor Denis Hynes joined out Eimear Ní Bhraonáin on KCLR Live earlier.

Hear what both had to say here:

Tullow Councillor Will Paton says it’s an issue in that area too.

He’s been telling KCLR that it’s hugely stressful for families; “I can think of one parent who contacted me in particular, her son has gone to secondary school for five years using a concessionary ticket and this is his leaving certificate year and he’s absolutely stressed out of it, he says ‘Mam, I’ve enough to be doing to do the leaving certificate, get me a place on the bus so I can get to school’ so I can imagine two weeks out that is horrendous for the families involved”.

He adds “I’m putting on a case-by-case basis the concerns to the inspector in the hope that he might be able to do something to help, it just seems so tremendously unfair that a scheme that was designed to help people by extending it to be free has actually knocked so many people off the system as a result of what was supposed to be as good deed, it’s sort of backfired a little in a sense that people who’ve used this bus for years find they don’t get a place because the scheme hasn’t been thought out fully”.

Meanwhile, Bus Eireann has this evening issued this tweet: 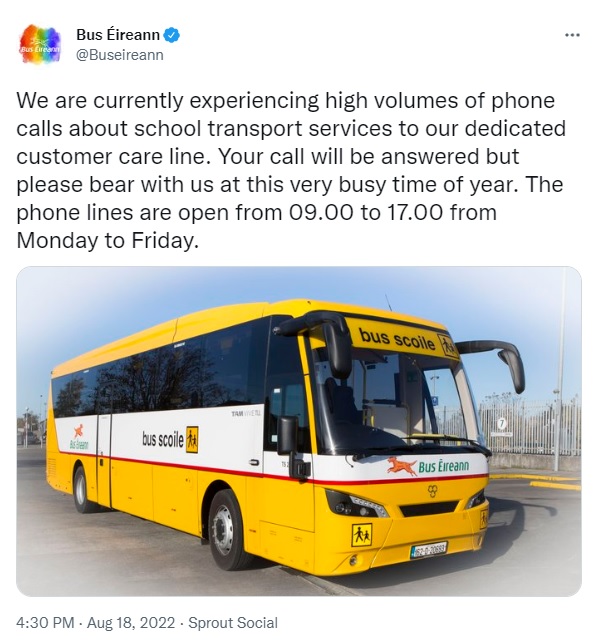